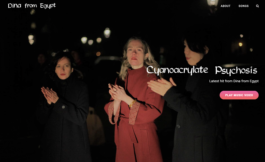 Dina from Egypt is a lip-synching band that always performs its latest hit. Its model, which is based on a franchise, strives to achieve maximum celebrity with minimum effort. Its core members write the lyrics; record, arrange and produce songs and the performances are choreographed and lip-synched to the prerecorded tracks.
More recent hits have been accompanied by a pop video. Since being founded in 2014, Dina from Egypt has involved many producers and performers, and have appeared at various venues.

Listen to our latest hits!!